Vancouver, British Columbia– May 30, 2017 – GoldMining Inc. ("GoldMining" or the "Company") (TSX-V: GOLD; OTCQX: GLDLF) and Bellhaven Copper and Gold Inc. ("Bellhaven") (TSX-V: BHV) are pleased to announce that, further to their news release dated April 12, 2017, GoldMining has completed its acquisition of Bellhaven.

Amir Adnani, Chairman of GoldMining, commented: "We are pleased to be closing our second major transaction in Colombia, which will further expand our significant land package within the Mid Cauca Belt, one of the most prospective and underexplored gold belts in the world. Beyond the current defined resource base, La Mina and Titiribi collectively host several underexplored porphyry targets, which we believe offer excellent opportunities for potential new gold discoveries in an area with excellent infrastructure. On behalf of the Company, we welcome Bellhaven shareholders of GoldMining and we look forward to advancing our asset base together for the benefit of all shareholders."

Garnet Dawson, CEO of GoldMining, commented: "The Mid Cauca Belt has seen increased activity in 2017 with Newmontꞌs strategic investment in Continental Goldꞌs Buritica project, IAMGOLDꞌs option of Gran Colombiaꞌs Zancudo project and the joint exploration success at San Matias by Cordoba Minerals and High Power Exploration. In the months ahead, we will review previous exploration results and work with Dr. Paul Zweng, the former Chairman and CEO of Bellhaven, who has joined our Advisory Board, to outline a drill program at La Garrucha to provide data to complete a maiden resource estimate for this prospect."

The transaction was completed by way of a plan of arrangement pursuant to an arrangement agreement between the parties dated April 11, 2017. Under the arrangement, GoldMining acquired all of the issued and outstanding common shares of Bellhaven (the "Bellhaven Shares") for total consideration of 7,339,303 common shares of the Company (the "GOLD Shares"), which included 1,842,750 GOLD Shares issued to the Toquepala Fund LP in exchange for 6,300,000 units of Bellhaven, each unit consisting of one Bellhaven Share and one warrant to purchase a Bellhaven Share, and 0.25 GOLD Shares issued to Bellhaven shareholder for each outstanding Bellhaven Share. As a result of the transaction, Bellhaven will also pay US$100,000 and US$247,000 to Bellhaven's former Chairman and Chief Executive officer and its former Chief Financial Officer, respectively, in connection with certain change of control and termination provisions under their consulting agreements with Bellhaven.

The Company further announces the completion of Bellhavenꞌs previously announced acquisition of the remaining 24% equity interest in the entity that owns certain concessions underlying the La Mina Project ("La Mina" or the "Project") in exchange for a payment of US$300,000 and the delivery of 162,500 GOLD Shares to Monpal S.A.S., a company controlled by Alejandro Montoya-Palacios, a former director of Bellhaven. As a result, the Company now holds a 100% interest in La Mina.

La Mina is located approximately 41 km southwest of the city of Medellin in the Department of Antioquia, in central Colombia and approximately 6 km southeast of GoldMiningꞌs Titiribi Project (Fig. 1). The Project is comprised of two concessions that cover an area of 32 km2. Northern Antioquia has seen steadily increasing activity over the last several years including, but not limited to success by Cordoba Minerals and High Power Exploration at the San Matias copper-gold project, Continental Goldꞌs recently permitted high-grade Buritica gold project and investment by GoldCorp, IAMGOLDꞌs recent option agreement with Gran Colombia Gold on the past producing Zancudo gold mine, and AngloGold Ashanti and B2Goldꞌs development stage Nuevo Chaquiro project. The Project is road accessible by paved highway to a junction with an 11 km gravel road that leads to site. Water, power and labour are readily available at the Project site.

La Mina includes the Middle Zone and La Cantera gold-copper porphyry deposits as well as the highly prospective La Garrucha prospect located approximately 800 m to the east. The aeromagnetic anomaly over the nearby La Garrucha prospect is substantially larger than those over both the La Cantera and Middle Zone deposits. It has been partially tested by drilling (6,734 m in 17 holes) and future exploration programs will focus on expanding the area of mineralization in order to complete a revised resource estimate. In addition, there are several prospects including El Limon, El Oso, Media Luna and Buenavista that require additional follow-up exploration (Fig. 2).

The Middle Zone and La Cantera deposits occur within 400 m of each other and were the subject of a resource estimate published by Bellhaven in October 2016 (Table 1). The resource was based on 14,284 m of drilling in 88 drill holes. Block models were created with parent blocks measuring 5 m3 for the Middle Zone and 10 m3 for La Cantera. Inverse distance squared was used to interpolate grade into blocks at the Middle Zone and ordinary kriging was used to interpolate grade into blocks at La Cantera, which in both cases were constrained by geology. Indicated mineral resources, which comprise approximately 70% of the resource, were defined as blocks that are within 35 m of a drill hole and where a minimum of two drill holes were used to estimate grade. Grade-capping was employed at the Middle Zone to limit the impact of high-grade outlier samples. Gold was capped at 4.2 ppm, silver at 25.5 ppm and copper at 3,000 ppm. Densities of 2.65 t/m3 for the Middle Zone and 2.70 t/m3 for La Cantera were used to convert volumes to tonnages and were based on 636 individual measurements of drill-core samples.

The conceptual pit delineated resource used a Whittle-Pit algorithm with the following input parameters to calculate the in-pit resources:

Table 1: Indicated and Inferred Resource at a 0.25 g/t gold cut-off for La Mina.

The resource estimate for La Mina is based on a technical report completed for Bellhaven by Scott E. Wilson, C.P.G. titled "Technical Report for the La Mina Project, Antioquia, Republic of Colombia", who is independent of Bellhaven and GoldMining within the meaning of National Instrument 43-101, with an effective date of October 24, 2016. Please refer to the technical report for further information regarding the La Mina Project, a copy of which is available under Bellhaven's profile at www.sedar.com.

As a result of completion of the arrangement set forth above, GoldMining acquired ownership and control of 100% of the outstanding Bellhaven Shares. In connection therewith, the Company will file an early warning report pursuant to National Instrument 62-103 – The Early Warning System and Related Take-Over Bid and Insider Reporting Issues containing additional information respecting the foregoing matters. A copy of such report may be obtained from Bellhaven's SEDAR profile at www.sedar.com or by contacting the Company at the contact particulars set forth herein. The Company did not own any Bellhaven Shares prior to completion of the transaction. It is expected that the Bellhaven Shares will be de-listed from the TSX Venture Exchange and that Bellhaven will make an application to cease to be a reporting issuer in the applicable jurisdictions.

Paulo Pereira, President of GoldMining has reviewed and approved the technical information contained in this news release for GoldMining. Mr. Pereira holds a Bachelorꞌs degree in Geology from Universidade do Amazonas in Brazil, is a Qualified Person as defined in National Instrument 43-101 and is a member of the Association of Professional Geoscientists of Ontario.

GoldMining Inc. is a public mineral exploration company focused on the acquisition and development of gold projects in Colombia and other regions of the Americas. GoldMining Inc. is advancing its Titiribi Gold-Copper Project located in the Department of Antioquia, Colombia, its Cachoeira and São Jorge Gold Projects located in the State of Pará, northeastern Brazil, its Whistler Gold-Copper Project located in the State of Alaska, United States of America, and its Rea Uranium Project in the western Athabasca Basin in northeast Alberta, Canada.

The above global estimated resource table is provided for information purposes only.

This document contains certain forward-looking statements that reflect the current views and/or expectations of GoldMining with respect to its business and future events, including expectations respecting the La Mina Project, potential synergies between the Company's and Bellhaven's projects and any future exploration programs and other work on the La Mine project. Forward-looking statements are based on the then-current expectations, beliefs, assumptions, estimates and forecasts about the business and the markets in which the Company operates, including that  historical exploration results will be confirmed and potential synergies will be realized. Investors are cautioned that all forward-looking statements involve risks and uncertainties, including: the inherent risks involved in the exploration and development of mineral properties, the uncertainties involved in interpreting drill results and other exploration data, the potential for delays in exploration or development activities, the geology, grade and continuity of mineral deposits, the possibility that future exploration, development or mining results will not be consistent with the Company's expectations, accidents, equipment breakdowns, title and permitting matters, labour disputes or other unanticipated difficulties with or interruptions in operations, fluctuating metal prices, unanticipated costs and expenses, uncertainties relating to the availability and costs of financing needed in the future, including to fund any exploration programs and any inability to realize upon expected synergies between the Company and Bellhaven . These risks, as well as others, including those set forth in the Company's filings with Canadian securities regulators, could cause actual results and events to vary significantly. Accordingly, readers should not place undue reliance on forward-looking statements and information. There can be no assurance that forward-looking information, or the material factors or assumptions used to develop such forward looking information, will prove to be accurate. GoldMining undertakes no obligations to release publicly any revisions for updating any voluntary forward-looking statements, except as required by applicable securities law. 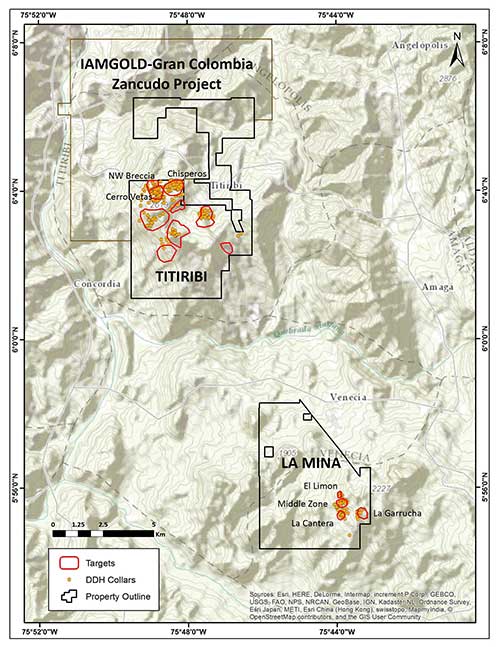 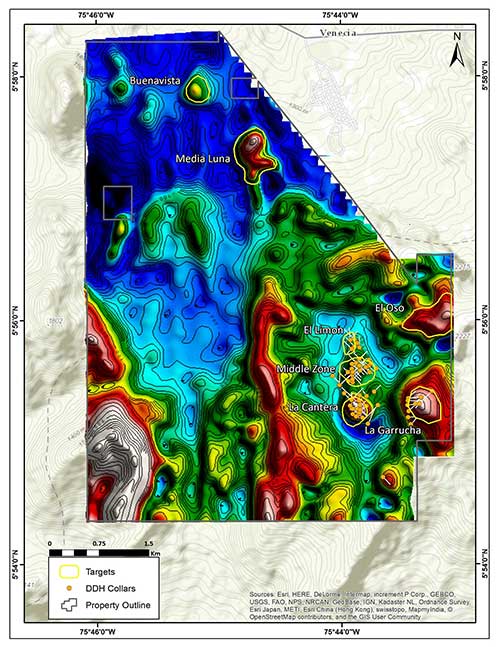 Sign Up To Receive The Latest
"GoldMining Inc. News and Sector Updates"
Now